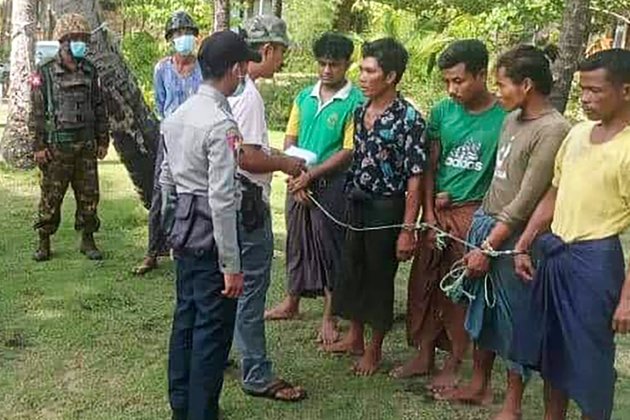 BANGKOK - At least 16 people from Myanmar's Rohingya minority have died after a storm capsized the boat they were traveling on to seek refuge in another country, officials and a recovery team member said Tuesday.

There were 35 survivors of Saturday's accident that took place off Myanmar's southwestern coast and four people were missing, the officials said.

UNHCR, the U.N.'s refugee agency, expressed shock and sadness about the accident in a statement and said children were among those who had died.

The Rohingya, a Muslim minority, have long been persecuted in Myanmar. More than 700,000 Rohingya have fled the country to neighboring Bangladesh since August 2017 to escape the brutal counterinsurgency campaign of Myanmar's military following an attack by a Rohingya insurgent group in Rakhine state.

Myanmar's government has denied accusations that security forces committed mass rapes and killings and burned thousands of homes, but the U.S. government recently labeled actions by the country's military as genocide. 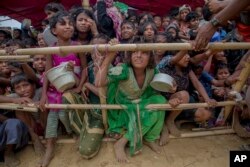 FILE - Rohingya children, who crossed over from Myanmar into Bangladesh, wait squashed against each other to receive food handouts at Thaingkhali refugee camp, Bangladesh, Oct. 21, 2017.

There are more than 100,000 Rohingya left in Myanmar, confined in squalid displacement camps, along with those living in crowded refugee camps in Bangladesh.

Groups of Rohingya from camps in both countries embark on hazardous voyages to the Muslim-majority countries of Malaysia and Indonesia to seek a better living.

'Some 630 Rohingya have attempted sea journeys across the Bay of Bengal from January to May 2022,' the UNHCR statement said, with women and children making up 60% of those trying to flee.

The statement added: 'The risk of abuse at the hands of smugglers and the peril of the sea journey itself are both exacerbated during prolonged journeys, when a safe harbor for disembarkation cannot be found.'

An Ayeyarwaddy Region resident said the 16 bodies, including those of two young boys, were recovered near Pathein township, about 300 kilometers (180 miles) west of Yangon, Myanmar's largest city. He spoke on condition of anonymity because Myanmar's military government seeks to tightly control the flow of information.

A local official, who also requested anonymity for the same reason, said most of the 50 people on board the boat were men under 30 years old. He said the bodies were buried and that the 35 survivors were taken away by the security forces.

Maung Maung Than, a spokesperson for the Ayeyarwaddy Region government, confirmed that the accident happened but did not give further details.

'The latest tragedy shows once again the sense of desperation being felt by Rohingya in Myanmar and in the region,' Indrika Ratwatte, UNHCR's director for Asia and the Pacific, said in the agency's statement. 'It is shocking to see increasing numbers of children, women and men embarking on these dangerous journeys and eventually losing their lives.'

ASSAM, India: During this week's heavy rains, which caused the region's worst floods in years, staff at the Cachar Cancer ...

Nepal should respect 'my body, my right' concept: Activists

KATHMANDU, Nepal - According to human rights activists, if people choose sex work as a profession voluntarily, the state should ...

KAREN STATE, Myanmar - Over the past three days, an army outpost meters away from Myanmar's border with Thailand has ...

DHAKA, Bangladesh- The Japanese government is lending Bangladesh $ 1.4 billion (Tk11,400 crore) to construct a subway in Dhaka. Both ...

DUBAI, UAE: The Arab states have built significant amounts of solar and wind power installations, and are in line to ...

LONDON, England: A second referendum on Scottish independence is set to be held in October 2023. The Scottish government, led ...

WATFORD, UK: Watford F.C. has cancelled a friendly match against the Qatar national team due to the Gulf country's human ...