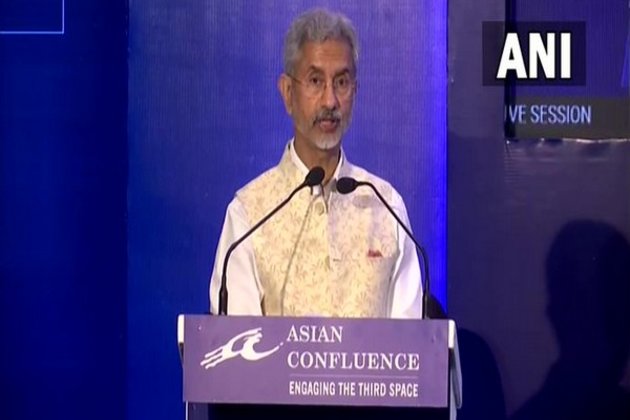 Guwahati (Assam) [India], May 28 (ANI): External Affairs Minister S Jaishankar on Saturday said that the coming together of India's 'Act East' and 'Neighbourhood First' policies will have an impact on the country beyond the confines of South Asia.

Addressing the Natural Allies in Development and Interdependence (NADI) Asian Confluence River Conclave in Guwahati, Jaishankar said, "The coming together therefore of the Act East and the Neighbourhood First policies have an enormous reinforcing impact. And it is one that extends beyond the confines of South Asia."The EAM said that the realisation of this is evident from the potential of BIMSTEC in the Bay of Bengal region.

During the event, Jaishankar said that if the land connectivity between Myanmar and sea connectivity between Bangladesh become viable then on a commercial scale, it will create an East-West lateral with sweeping consequences for the continent. He further said that it will be not only build on the partnership that India has with ASEAN countries and Japan but the 'Indo-Pacific Economic Framework' will also make a difference.

Recently during the Quad Leaders' Summit in Japan, the member countries including India discussed on the Indo-Pacific Economic Framework which will enable the United States and the allies to decide on rules of the road that ensure American workers, small businesses, and ranchers can compete in the Indo-Pacific.

Jaishankar said that the restoration of six historical cross-border rail links, dormant since 1965 is one of the major steps. He also said that the Shahabazpur (Bangladesh) to Mahishasan (Assam) link, which is the operational one, will be extended within Bangladesh and connected to the Kuluara-Shahbazpur rail line currently being modernised using an Indian line of credit (LoC).

"Inaugurated in December 2020, the Chilahati-Haldibari (West Bengal) line will further enhance Assam's connectivity to Bangladesh through New Jalpaiguri, including passenger traffic. A new rail link from Akhaura (Bangladesh) to Agartala (Tripura) too is being developed under grant assistance and we all know that this is already increasing trade between India and Bangladesh," Jaishankar added.

The EAM also informed about the projects that India is collaborating with Bangladesh on a series of road projects including the improvement of the Ashuganj River Port-Akhaura Land Port Road under an LoC of more than USD 400 million.

He further informed that the road project which is connecting Baruerhat to Ramgarh on the India-Bangladesh border, will increase Tripura's road connectivity with Bangladesh and is being implemented under another LoC of USD 80.06 million.

"The success of four border haats between India and Bangladesh in the period before the pandemic has spurred enthusiasm. This encouraged us to set up three new haats in Meghalaya, inaugurated by Prime Minister Modi during his visit to Bangladesh in March 2021," Jaishankar said.

He further said that nine new haats are being set up, three in Meghalaya, four in Tripura and two in Assam. Cross-border power transmission lines and digital connectivity infrastructure offer additional dimensions of connectivity.

Jaishankar, in his address, said that better connectivity is central for improving the business and easing livelihood in the state, for which they would need to tackle the topography-related challenges.

"Better connectivity is central to improving ease of doing business and living. We need to tackle topography related challenges," he said.

Earlier on Friday, Assam Chief Minister Himanta Biswa Sarma said that his government is working to make the state an industrial hub.

Sarma said, "Northeast is India's gateway to Southeast Asia. Our government is working to make Assam an industrial hub not only for the region but also for catering requirements of the Association of Southeast Asian Nations (ASEAN) countries." (ANI)

Villagers being conscripted to crush anti-junta resistance in Myanmar

College suspends girl for hanging out with teacher murder suspect

DHAKA, Bangladesh - The Haji Yunus Ali School and College in Ashulia, Savar, has suspended a student hanging out with ...

KATHMANDU, Nepal - According to the Department of Forests and Soil Conservation, 90 settlements in Salyan are at high risk ...

LAHORE, Pakistan - FIFA, the world governing body of football, lifted Pakistan's suspension on Thursday and extended the mandate of ...

DHAKA, Bangladesh - Tarique Rahman's support for Bangabandhu Sheikh Mujib's killers has been criticized by Sheikh Hasina. The murderers of ...

CAIRO, Egypt: Egyptian authorities have prohibited swimming in a stretch of the Red Sea after an Australian woman was killed ...

LONDON, England: A UK parliamentary committee has told lawmakers that they may not bring babies to parliamentary proceedings and debates.The ...

WASHINGTON D.C.: Hershel "Woody" Williams, the final surviving Medal of Honor recipient from World War Two, has died at a ...

SEATTLE, Washington: A Norwegian cruise liner has canceled its sailing and returned to port after damage was discovered following its ...

US sanctions causes 90 percent drop in chips sent to Russia

WASHINGTON D.C.: U.S. Commerce Secretary Gina Raimondo has said that since the U.S. and its allies imposed sanctions on Moscow ...